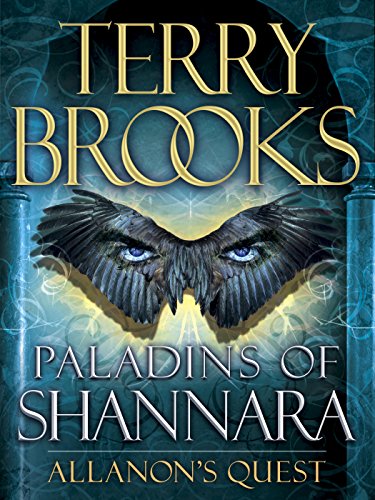 The history is thus: The once-Druid Brona, seduced by his pursuit of dark magic, was forever transformed into the Warlock Lord—whose evil would be the downfall of the Four Lands and the death of the Races. Against him, the Elven King Jerle Shannara wielded the fabled sword that bore his surname and triumphed. Or so it was believed. But though the Dark Lord was driven out . . . he was not destroyed.

The Druid Allanon knows only too well the prophecy passed down to him by his late master: that eventually the Warlock Lord will return. Now, after hundreds of years, that day seems imminent. And the time is at hand for the Sword of Shannara to once more be brought forth from its sanctuary to serve its ancient purpose. All that remains is for a blood descendent of the Elven house of Shannara to carry the blade into battle.

With ever more portents of doom on the horizon, Allanon must seek out the last remaining Shannara heir, who alone will bear the burden of defending the Four Lands’ destiny. But with agents of darkness closing in from behind, unexpected enemies lying in wait ahead, and treachery encroaching on every side, there can be no certainty of success. Nor any assurance that this desperate quest will not be the Druid’s last.